Several years ago, a grant from the Mt. Shasta Trail Association enabled Castle Crags State Park to purchase top quality redwood for reconstruction of decaying structures. Some bridges have already been repaired or replaced, but recently Mark Telegin engineered and built the latest bridge that was needed. Late last month, his crew of helpers/builders (Neil Jacobs, David Tucker, Steve Russell, Jack Moore, Todd Barto—CC Park Ranger, and John Harch) assisted him in hauling the timbers, prepping the site, and installing the bridge. Note the crumbling old bridge, and the armoring of the footings with rocks, which was no small task. 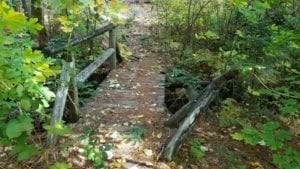 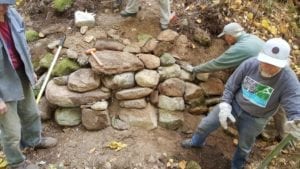 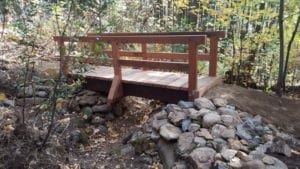 It is not known whether this bridge on the Flume Creek trail was built by the Civil Conservation Corps, or whether it came along later, but the same concern for conservation and preservation fueled the motivation for all the restoration projects Mark and his team have undertaken.  It looks like the new bridge will be around for many years to come!

MSTA news and event invitations in your inbox. No spam.