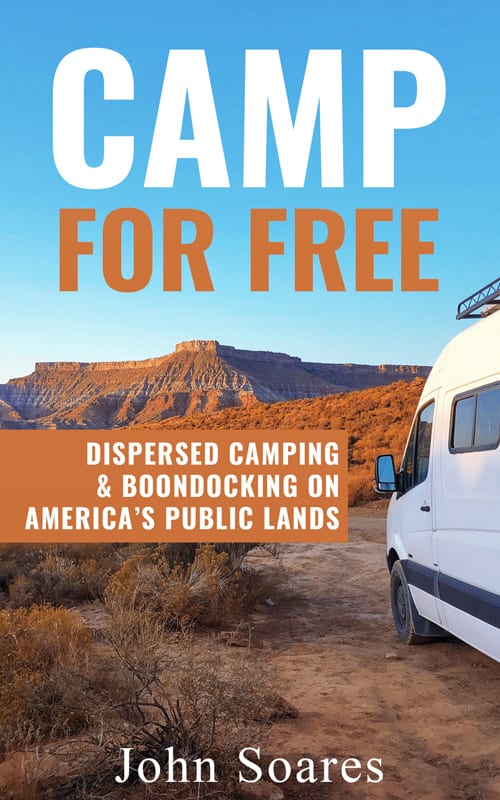 What Is Dispersed Camping?

Dispersed camping (also called boondocking) entails driving down a road on national forest land (such as Shasta-Trinity National Forest and Klamath National Forest) or Bureau of Land Management land (common in desert areas) and finding a beautiful and legal site to camp. These campsites are usually far from organized campgrounds and often also far from other people — and they’re usually free.

What Does Camp for Free Cover?

Camp for Free is not a guide to specific campsites; there are several hundred thousand sites on the over 400 million acres of public lands in the United States. Instead, the book is a how-to guide that includes all the details of enjoying dispersed camping, and how to do it both ethically and safely.

Shasta-Trinity National Forest has a series of rules you need to follow.

Camp at least 200 feet from streams, springs, meadows, and trails, and at least a quarter-mile from campgrounds, picnic areas, trailheads, state highways, and private property.

Seriously, make sure you have a California campfire permit and be aware that for much of summer into autumn all fires are prohibited in California national forests, including Shasta-Trinity National Forest and Klamath National Forest. Even if it’s early in the season and campfires are allowed, strongly consider skipping it. Always make sure you follow all regulations and understand fire safety.

As the Mount Shasta area becomes more popular, hikers and campers tend to congregate in a few popular areas, especially on the west side of Mount Shasta and nearby. Try to go farther out so that you have more privacy and can minimize the impact of humans on the environment.

Call the ranger station that has jurisdiction and ask about best places for dispersed camping, including which roads are open and any current restrictions or rules.

More Information about Camp for Free

Get all the details of Camp for Free here. For now, the book is primarily for sale on Amazon, but will have wider distribution by the end of 2020.

MSTA news and event invitations in your inbox. No spam.